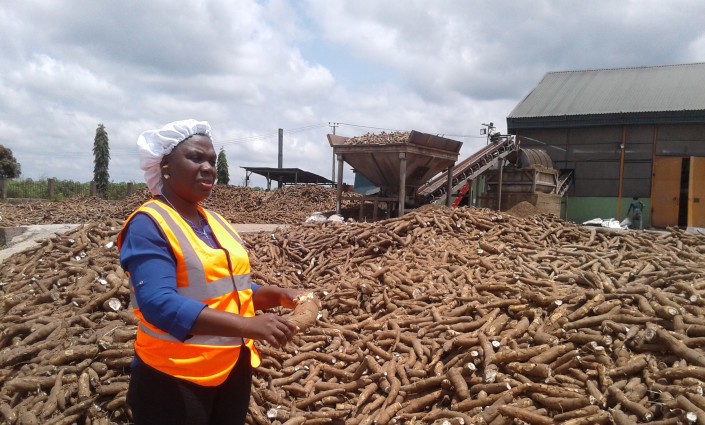 DISCOVER CASSAVA AND ITS OPPORTUNITIES IN CÔTE D’IVOIRE

With an average of 2.5 million tonnes produced per year, the cassava sector can be summed up in 3 activities, indicates Germain Yao (Director of studies and economic information at the Chamber of Commerce and Industry (Cci) of Abidjan ). Production, processing and marketing.

In Côte d’Ivoire, about ten varieties are grown. On generous soils as well as infertile soils, the tuber resists severe climatic conditions. Abidjan, the economic capital, supplies the national market with 34% of production. Followed by the Gbêkê region (central north) with 18%. The region of Marahoué (center west) and that of Comoé (east) bring up the rear with respectively 11% and 9% of national production.

Despite the good production conditions, the yield is still low. On average, Côte d’Ivoire produces 7 tonnes per hectare. Relatively low compared to America and other African countries.

Cassava is the 3rd calorie-rich food after rice and corn. It is one of the most consumed foods because of its diversity of processing. The tuber is processed into flour, semolina, starch, and tapioca. The best known format is attiéké. Its manufacture is made by several small semi-artisanal or artisanal units, often even family (much more important than industrial production).

In terms of marketing, cassava has the advantage of being sold from the leaves to the roots. Once processed, the products are consumed in major cities. Much more nationally than abroad.

But increasingly, cassava derivatives are sought after and in demand internationally. 4 main groups are exported. The root (also called cassava or cassava tuber), starch, semolina (gari, attiéké) and Tapioca. These last two derivatives constitute more than 85% of annual exports over the last 5 years. And they are found in some American, Canadian and WAEMU countries.

What obstacles to the development of the sector?

The first difficulties are related to the difficult access to improved varieties. Cassava research centers exist. Their mission is to improve yield by introducing higher quality tubers. However, there is a knowledge gap between the “researchers” and the planters, who are often illiterate.

The conditioning problem is very real. Especially for the roots. “There are not yet cold rooms capable of keeping them for 3 months” regrets Germain Yao, from the Chamber of Commerce of Côte d’Ivoire. To this must be added, difficulties in acquiring modern equipment. All the production chain is made largely with archaic means. A fuzzy and insufficiently organized production chain. “The division of labor is not clearly defined,” complains an expert.

The obstacles are in the realm of marketing. They are mainly related to road infrastructure. As a result, there is a real difficulty in bringing harvested cassava from rural areas to urban areas. Logistics is a hindrance. The trucks used are not always suitable for transporting cassava in appropriate and safe conditions.

Last difficulty, the “ignorance of derivatives on the international market”. Most agricultural communication is focused on cocoa and coffee. No “cassava stock market”.

The Ministry of Agriculture plans to increase cassava production to 3 million tons per year. And this systematically involves improving storage techniques. But beyond simple hopes and recommendations, there is an urgent need to take head on the difficulties linked to the sector and to provide concrete and immediate solutions.

What do I think of it

Cassava is ultimately a tuber that should be promoted for several reasons.

The first is that it could contribute to food self-sufficiency. It is eaten from the leaves to the root.

The second reason is economic. This is an opportunity to be able to industrialize all derivative products. By integrating a real marketing policy (internally and externally), cassava and its by-products can be sold. And sell well.

In addition, for a commodity that can be grown and processed anywhere in the country, these are jobs that could result. A real added value.