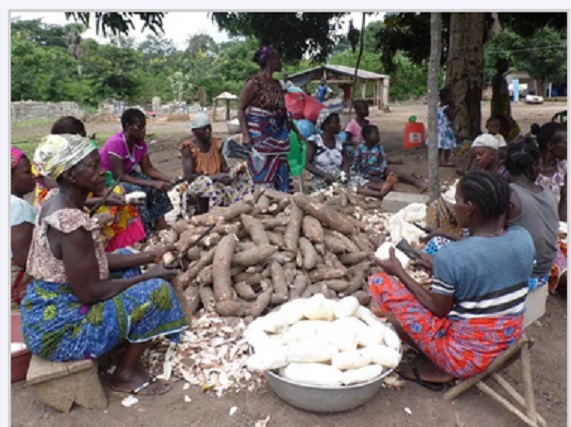 STUDY OF THE CASSAVA SECTOR IN IVORY COAST

This Rongead study is part of a project, carried out in partnership with Chigata, to strengthen two strategic sectors for food security in Côte d’Ivoire: plantain and cassava. Cassava, first cultivated as an intercrop, gradually became a “speculation” in its own right due to urbanization and the success of attiéké. It offered a processing activity in a rural environment. However, the sector is currently not very remunerative.

Production is almost always in surplus given the low level of investment required. If we add to this the high perishability of the product and the ever-increasing competition, we understand why prices remain at very low levels and why producers derive little income from it, except in the case of marketing in very large cities (Abidja, San Pedro) or export to the sub-region. The advantages of the culture are rather its low cost, its potential for storage “on the vine” and the possibility of artisanal processing in periods of reduced working time on the farm. One could qualify cassava cultivation as a “safe” crop rather than a “profitable” crop.

The “reassuring” advantages of cassava for producers perpetuate the situation of overproduction and structurally low prices. Under these conditions, it therefore seems more interesting to orient research and popularization with regard to cassava on the establishment of production techniques making it possible to reduce the workload or increase production without the addition of inputs. .

The use of cover crops to reduce the work of clearing and weeding and all forms of improved intercropping that can reduce the workload are probably those with the most potential.

The attiéké cooking stoves are generally fueled by wood or charcoal, which contributes to deforestation, the emission of greenhouse gases, and constitutes a significant part of the processors’ costs. In addition, this method of cooking makes the work difficult and harmful to their health. Improved stoves can save 50 to 80% of fuel while being easy to manufacture, with local materials therefore inexpensive.

The stimulation of demand should remain at the center of all attention because it will be the engine of the evolution of this sector in the coming years.

There are many potential outlets for processed cassava-based products, for human food but also for livestock, for textiles, plastics or pharmaceuticals. The public sector can promote investment in these sectors through incentive regulations. In particular, for the use of cassava-based bread flour in baking, several sector players have pointed out that without regulation the bakery sector will remain reluctant to adopt cassava flour. The Nigerian model and its regulations requiring a minimum use of cassava flour increasing over time could therefore be taken up in Côte d’Ivoire with a positive effect on the agro-industrial sector, on the cassava sector and on the trade balance. from Ivory Coast.